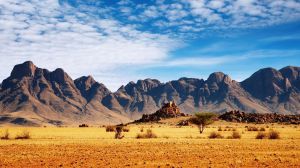 There are many types of deserts around the world that are different types of ecosystems. Here in North America, the term “desert” usually draws to mind images of the Southwestern states in America, such as Arizona, Utah, Nevada, California and New Mexico. Here, deserts such as the Sonoran and Mojave stretch for many hundreds of miles in some of the most widely recognized desert landscapes in the world. The desert is a natural environment unlike any other. There is an incredible draw and appeal to the desert that brings in travelers from around the world, but just what features make the desert so distinct?

The arid weather of the desert is responsible for the familiar plant life of the desert. Plants such as cactus, palo verde trees and creosote are adapted to grow in climates that have very little water. The Saguaro Cactus and the Prickly Pear Cactus are known for retaining water so efficiently that someone lost in the desert can survive by cutting them open and drinking their fluids. Vegetation in the desert is very sparse and the plants that do grow there are very recognizably associated with the desert of the Southwest.

Monsoon season is the time of year that replenishes the desert’s water table. The desert of the Southwest is frequently without rain, but when it does get rain, it comes in deluges. Desert monsoons have a huge impact on the environment and the landscape. The Southwestern desert is known for its red rock sandstone formations, which are created entirely by the movement of water through the desert. Monsoon season is one of the most photographed seasons of the desert due to the dramatic lighting and color that black clouds and bright sunlight create over the desert landscape.

The wildlife of the Southwestern desert is also very iconic. Its well known inhabitants range greatly, all the way from small insects to large game. When exploring the desert, it is important to keep an eye on the ground for dangerous creatures such as scorpions and rattlesnakes. A number of bird species, such as quail, roadrunner and cactus wren call the desert home. Medium sized desert mammals include the ringtail cat, jackrabbit and desert tortoise, while large sized desert mammals include the coyote, antelope, bobcat and mountain lion.